In Price action, we see different behavior of market price movement. If there is one price pattern which is the most deadly combination of losing money and greed, then it has to be “Event spike”

Before moving further I would like to show that this article is about fading certain price movements which can cause you a lot of losses .In other words, as with trading, “Penny saved is penny earned”.

What is an “Event spike”?
A large parabolic movement which follows an event such as earnings announcement, Economic reports etc.called ” Event spike “. This move is all about feeding frenzy or herd behavior of market participants are influenced by price moment itself! Some people even refer to this as price reflexive.

How does it look like?
A friendly picture would do the trick
Figure 1.1 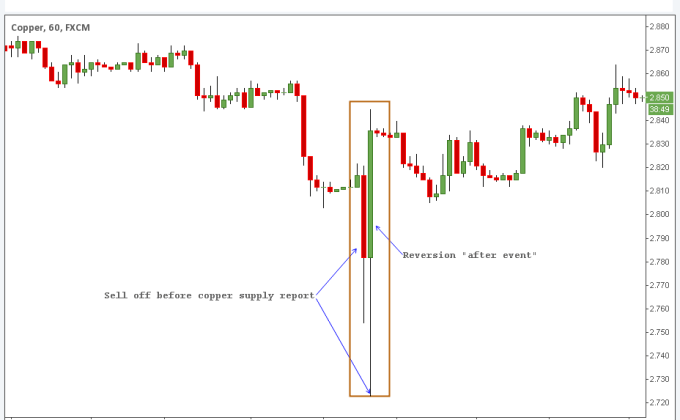 Can we trade it?
No! Not at all, We can’t trade movements like this if you are a “technical trader”. But for a price action trader it is possible!(I will share the strategy on next article).Simple rule is to keep an eye on “price sensitive” announcements or fundamental reports that are important for market participants. Also make sure that technical signals during these times should be avoided so that you won’t fall in the trap and lose money.

What to do?
Fade the first move after an announcement or economic reports, it doesn’t matter what signals you get from an indicator or your method, these are movements where we need to protect the funds. Also avoid placing any trades before an event and close existing positions if any.