This stock has been recommended in our sms community 2 days back at Rs 115.

Stock Highlight: HDFC Infrastructure fund has picked up 3.1 lakh shares to increase its stake to 0.76% in abrasives and industrial cement major. Though the stock has declined more than 37% from its january high of Rs 183, the average deliveries continues to be high at 74% of average trading volume of over 20,000 shares in last month. Also recently company also announced its merger with PACL, which is now a subsidary of a company. PACL engaged in business of acid resisting cements, corrosion resisting products, polymer concrete etc.

Company Profile:
CUMI was founded in 1954 as a tripartite collaboration between the Murugappa Group, The Carborundum Co., USA and the Universal Grinding Wheel Co. Ltd., U.K.

The company pioneered the manufacture of Coated and Bonded Abrasive in India in addition to the manufacture of Super Refractories, Electro Minerals, Industrial Ceramics and Ceramic Fibres. Today the company's range of over 20,000 different varieties of abrasives, refractory products and electro-minerals are manufactured in ten locations across various parts of the country. 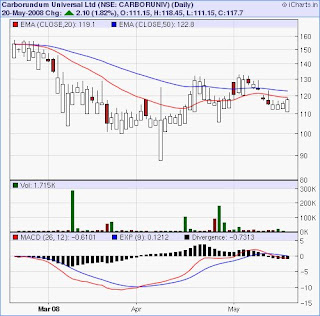 Net Sales grew to Rs. 165 crores, representing a growth of 27% over the sales for the corresponding quarter of last year (Rs.130 crores). Profits before interest and tax (before profit on sale of assets and investments) grew by 12%. The Company earned Rs.11 crores profits on sale of investments during the quarter. Profits before tax grew to Rs.32 crores (previous year Rs.23 crores) . .Profits after tax increased from Rs.17 crores to Rs.25 crores.

Carborundum Universal Ltd has informed BSE that the Register of Members & Share Transfer Books of the Company will remain closed from July 10, 2008 to July 24, 2008 (both days inclusive) for the purpose of payment of dividend.