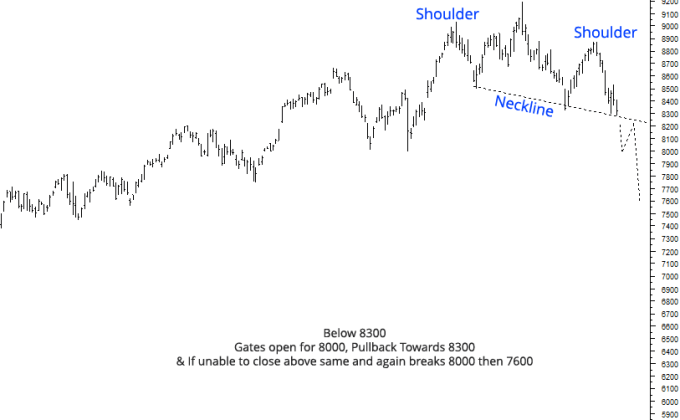 Short term Down
Medium term – Down
Primary – Up

Observation : Nifty future made the low of 8280.90 and closed the week at 8318.80, The short-term and medium term trends are down and nifty is just moving around its 200 day moving average. From the daily charts above we can clearly see a head and shoulder formation and which is very clear in breaking its neckline.
[wp_ad_camp_5]

The strength of the formation is strong since these are reversal patterns head and shoulders are formed mostly near tops. The neckline in slanting downside and once we breakout below 8300 convincingly another sharp sell of towards 8000 can be witnessed in markets. Head and shoulder formation targets is 7600 thou it shall take few weeks to reach if the pattern does not become invalid in coming sessions.

On upside the major resistance now is at 8600. We are entering fno expiry week for april series. This month has been in favor of bears.

Trading in Stock Market Since 2006. Iam working as a Technical Analyst in Wealth Creator. Wealthcreator.co is a research firm. We have Been Serving The Traders Of Indian Stock Market, Commodity Market From Past Seven Years With Tailored Products To Meet The Needs Of The Individual Retail Trader, Brokers,Corporate & High Net Worth Individuals & NRI’s.