You are here: Home / Forex / Wave of Tsunami in Turkish Lira 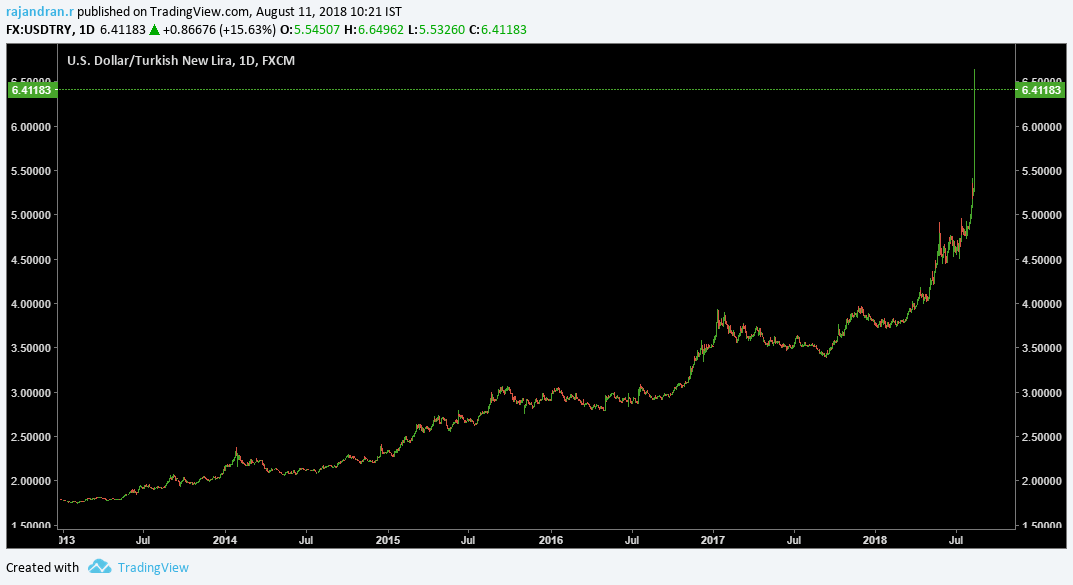 The Turkish lira fell to an all-time low against the dollar. The lira tumbled 15.63% against the dollar on friday to 6.4323 from the previous close. The currency — which has lost more than 40 per cent of its value this year — was 18.5 per cent lower at one point on Friday. Turkish stock market index – Borsa Istanbul 100 ended -2.23% at Friday close. Year to Date stock market index is down by 17.68%.

The steep decline in the Turkish currency came after the European Central Bank expressed concerns about potential contagion from Turkey’s problems, especially in the banking sector.

Goldman Sachs warned this week that a further drop in the Turkish lira to 7.1 versus the dollar could largely erode the country’s banks’ excess capital. “Incremental lira depreciation could increase capital concerns for banks, especially for ones with lower capital levels,” Goldman’s analysts said.

I have just authorized a doubling of Tariffs on Steel and Aluminum with respect to Turkey as their currency, the Turkish Lira, slides rapidly downward against our very strong Dollar! Aluminum will now be 20% and Steel 50%. Our relations with Turkey are not good at this time!

In response, Turkish President Recep Tayyip Erdogan said, “Don’t forget this: if they have dollars, we have our people, justice and God,” he said. “We will come out of the economic war successfully.” Recently he urged Turkish people to sell dollars and gold and buy lira.

To put the Turkish financial crisis in some perspective–the total value of the Turkish stock market is now less than the market cap for Netflix. There are 80 million people in Turkey.

The Financial Times reported that the European Central Bank is said to be concerned about the three lenders’ exposure to Turkey. Spain’s BBVA, Italy’s UniCredit and France’s BNP Paribas, which all have significant operations in Turkey. The ECB is concerned about the risk that Turkish borrowers might not be hedged against the lira’s weakness and begin to default on foreign currency loans, which make up about 40 per cent of the Turkish banking sector’s assets.

#Turkey matters: Lira crisis is becoming more & more of a problem for Europe. European banks drop on concern they may suffer heavy losses from Turkish exposure. Most at risk for #Spain's banks, but #Italy or #France have reasons to be concerned. https://t.co/0cUrxty70z via @welt pic.twitter.com/x8rZWbJEUl 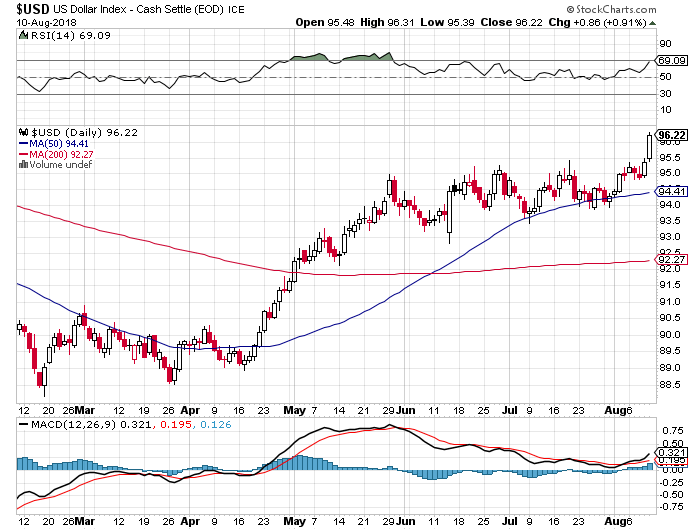 Euro drops below $1.14, lowest in 13mths on #Turkey contagion fears.

USDINR ended at 68.83 and fears that this ripple effect could spill into Monday trading as well.