You are here: Home / Commodities / In Depth Analysis on Comex Gold

Lets come to fundamental side before, we witness a blast in gold price after 2008 recession & gold price almost double in just 3 year span while in last 2 year gold also corrected more than 50% from the life time high. This is the biggest correction in past 12 years in gold & may remain always. Gold rallied from 2008 on basis of safe haven buying , alternate & safe investment , later on the based on QE program from US & many . But now we are on a stage were all these issues seems to be getting easing or losing their effective shine. So most probably soon we are going to enter in the big range trading in coming months.

On technical front , here is the daily charts of gold with lots of awwh & upps. 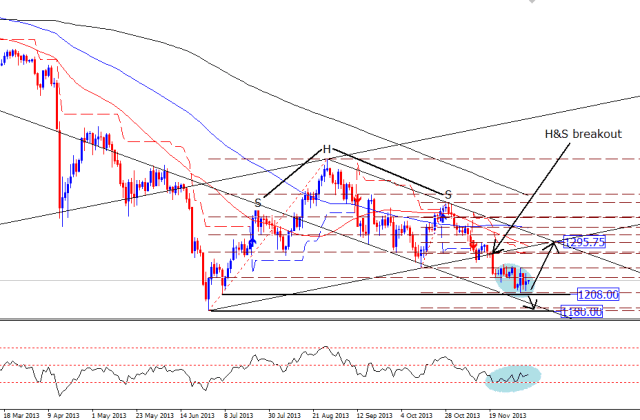 Daily charts has many support now specially the low made of $1180 made in june 2012. When we look at the technical side we find a major H&S pattern which also had breakout few weeks back. Gold fall sharply after that & now taking support from the parallel tradelines around $1208 & then $1180. The area around $1208 represent the 138.2% correction area while $1180 represent 161.8% correction area of the last ascending wave topped around $1361. Meanwhile we also witness a very strong positive divergence appearing on RSI , suggest for a bounce.

WHAT if even after all this technical support US reduce QE figure & gold break below $1180 ??
We shifted our focus on weekly charts to get the right answer.

Weekly chart of gold seems to be more clear. The $1180 is still acting as major support on weekly chart. The major possibilities of a double bottom is there as well as elliott wave 5th leg may complete here ( not sure). Again a positive divergence is there on weekly chart but little weak compare to daily. STILL market is the BIG BOSS , so what is $1180 fail ? Yes another parallel support around $1045 area & surly positive divergence become more reliable if gold break below $1180 & move continue to $1045 area. 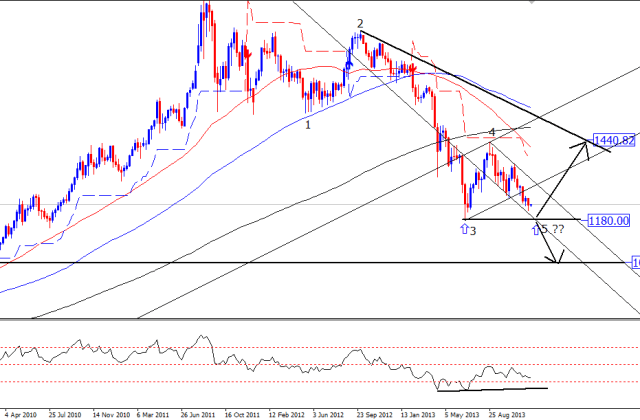 Mantra commodity serving to clients from last 7 years & made a strong bond of trust with our dedication towards work.Our main functioning area is .Technical analysis on all major commodities available HERE. Or you can write us on mantracommodity@yahoo.com