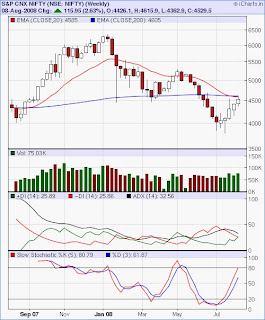 Nifty CMP : 4529
Still everyone is saying that it is a bear market rally. But the Global situation improves far better
than previous days. Also Our market discounting all the negative factors even in this oversold zone
and still holding its hard earned gains.
Some Positive Factors
1) Dow Rallied 300 pts last friday
2)Crude Oil Fells to $115/barrell
3)SGX Nifty Closed at 4595
4)Yen Weakens to 110/Dollar
5)Rupee Weakens to Rs41.95/Dollar
But Currently Nifty is facing some intermediate resistance near 4613 where the 20 day EMA and
200 day EMA merges as witnessed from the weekly charts. Monday likely to be a testing day
for the bulls to close above the 20 day EMA. And Tuesday is IIP no's are going to be released
so IIP no's are going to decide the direction of the market. Sentiment may remain cautious in the forthcoming week, as the market regulator Securities & Exchange Board of India (Sebi) meets on 13 August 2008 to review the rules relating to issuance of Participatory Notes (PNs) by foreign portfolio investors, which it had revised in October 2007. A review of securities lending & borrowing mechanism, know your client (KYC) norms for FIIs and status on launch of currency futures are likely to be discussed in the meeting.
This whole week is going to be the testing week for the nifty to remain sustained above 4613
Regards,
Rajandran
Author – Marketcalls
Source:
www.marketcalls.in

Is the Oil nearing the Bottom?

I woke up in the morning just to see the headlines "Oil Drops to 21-Year Low With Storage Filling as Demand Shrivels". Ever-since ...

Gold-Oil Ratio at the Historical High

Now with One ounce of Gold one can buy 83 barrels of Crude Oil. Gold-Oil Ratio is at the historical peak as the FED...