This company was incorporated as a public limited company on February 25, 1985 to carry out business of yarn, cloth, fibre and the business of leasing of moveable and immoveable properties. These activities were carried out till September 30, 2005.

Effective December 5, 2005 the controlling interest of the company was taken over by Shriram EPC Ltd., and Mrs. Vatsala Ranganathan. The new management has discontinued the above businesses of the company and has now entered the business of manufacturing met coke by purchasing the Coke Project from EPCPL situated at Haldia, West Bengal.

Ennore Coke Limited also plans to set up a power plant at the same location for generating 6 MW of power by utilizing the waste heat generated from the process of manufacturing met coke.

The company has also proposed to expand the manufacturing capacity of the Proposed Coke Project from 100,000 TPA to 300,000 TPA and increasing the capacity of generation of power from 6 MW to 18 MW at Haldia, West Bengal. 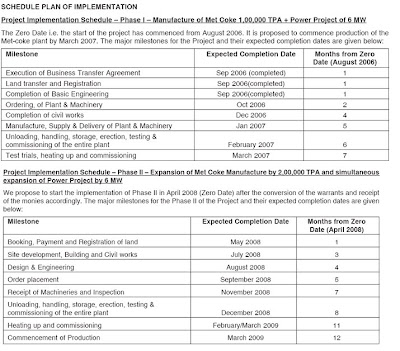 Sector Analysis
A. COKE INDUSTRY
Coke, a derivative of metallurgical coking coal, plays a very significant role in metallurgical processes. Coke is the main source of heat and is also the reducing agent required to facilitate the conversion of metallurgical ores into metal in the smelting process. Major Coke production has traditionally been captive, i.e. Coke is produced in the coke oven batteries of integrated steel plants. Hardly any surplus coke is available from these captive coke oven batteries for outside sale. During the last 10-12 years, numbers of pig iron plants and even integrated steel plants have been built in India without captive coke making facilities, which now rely on imported coke. As a result, India is now importing coke in sizeable quantity. Most Indian coke oven batteries are located in the eastern region of the country. As a result, the various coke consumers in the western region and southern region of the country essentially import coke.

Keeping in view the above scenario in mind, ECL is now to engaged in Manufacturing of Met Coke and for this purpose has entered into an agreement on May 15, 2006 for purchase of Nonrecovery Coke Oven Project of 1,00,000 TPA of met coke at Haldia, West Bengal which is at present under implementation and being set up by Ennore Power & Coke Pvt. Ltd. (EPCPL). The requirement of funds for purchase of aforesaid met coke project of EPCPL is met out of the proceeds of the rights issue.

Further ECL after purchasing the met coke project from EPCPL and after completing the said project, also proposes to expand such met coke manufacturing capacity by 2,00,000 TPA out of the proceeds of the warrants issue.

B. POWER INDUSTRY
Power is a critical infrastructure for economic development and for improving the quality of life. The achievement of increasing installed power capacity from 1362 MW to over 100,000 MW since independence and electrification of more than 500,000 villages and towns are impressive in absolute terms. On account of inadequate generation capacity, the country is plagued by power shortages. The total energy shortage, during 2004-2005, was 43,258 million units, amounting to 7.3 % and the peak shortage was 11.7% per cent of peak demand. With increasing urbanization, industrial growth and per capita consumption, the gap between the actual demand and supply is likely to increase. In this scenario, the GOI expects that alternative/renewable sources of energy, such as wind energy, biomass energy and energy generated through waste heat recovery process are likely to play an increasingly important role in bridging the demand supply gap and conservation of fossil fuels.

In the manufacturing process of coke, volatile matter gets released from the raw coal in the form of gas and is burnt in the oven to produce heat for carbonization and after completing the process of carbonization the waste heat at very high temperature is released in the atmosphere. Such waste heat if utilized for generation of steam, same can be used in the steam turbine for generation of power at a very low cost and in an eco-friendly manner, as no raw material or any other fossil fuel is used in this process of generation of power.

With this view in mind, ECL proposes to set up a power plant of 6 MW capacity by using waste heat generated in the process of manufacturing of met coke in the premises of Met Coke project. The power project is financed out of the proceeds of the rights issue. Further, ECL has also purchased from EPCPL the Met coke project that is under implementation and at the time of expanding its capacity by 2,00,000 TPA, it would also expand the power plant capacity by 12 MW which will be financed out of the proceeds of the warrants issue.