Bihar Tubes are looking at the strong growth infrastructure sector, They have recently acquired a company in Southern India and this is a very strategical acquisition, which will give them presence in the South. It is a very lucrative market and it will also save their transportation cost. In the same line,they are looking at either acquisition or a Greenfield expansion in the Western region. Bihar Tubes are looking at some units in Maharashtra these are established in it, which are having good production facilities, and we hope to further augment those. 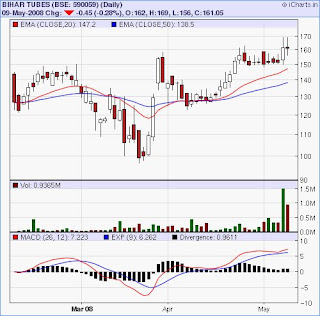 Bihar Tubes Fund Raisisng :
Source: BSE – Bihar Tubes Ltd has informed BSE that a meeting of the Board of Directors of the Company will be held on May 16, 2008, inter alia, to consider the following businesses: 1. To consider and evaluate the various fund raising options such as Global Depository Receipts (GDRs) and / or American Depository Receipts (ADRs) and / Foreign Currency Convertible Bonds (FCCB's) and / or Fully Convertible Debentures (FCDs) or any other convertible securities and / or securities linked to equity shares and / or any other instruments or securities through the QIB / Private Placement route or Institutional Debts from domestic or international markets and / or any combination thereof for the proposed expansion plans and modernization of existing manufacturing facilities of the Company. 2. To consider the reconstruction of Board of Directors and committees thereof.
Source:
www.marketcalls.in