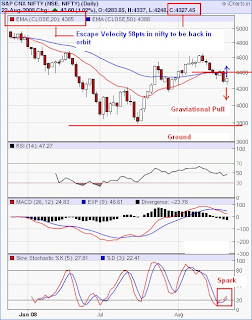 Click the charts to get maximized
In Physics there is a concept called Escape Velocity , It is commonly described as the speed
needed to "break free" from a gravitational field.If an object attains escape velocity, but is not
directed straight away from the planet, then it will follow a curved path. This is the concept used
in rockets to make it free from gravitational Field and to revolve around the orbit. And Now in
case of nifty the gravitational pull is downwards as its closed below 20 day EMA.
Currently nifty is facing a downward gravitational force(remember if a ball thrown upwards
then the ball will take a curve path and fell down because of gravitatinal force. And it
will falls to the ground due to lack of Escape velovity).So nifty now needs an escape velocity
that is a force which needs to keep nifty above 4327 forever. The predicted nifty escape velocity is
4385 ie (>20 day EMA) to put nifty once again in its orbit. In any case if nifty closes below 4385
then once again nifty is poised to the gravitational pull and the acceleration is going to be strong
further to reach its ground soon.
In Simple terms Market has to remain close above 4385 by tommorow. Some of the stocks that
can offer the escape velocity to nifty :
Top Gears in Nifty:
RANBAXY,RELIANCE,BHEL,INFY,HDFC,ONGC: Still these counters are not giving up as its candle are
still manage to stay above 20 day EMA. Strong Escape Velocity may come up from these counter.
And Ranbaxy,HDFC,BHEL looks the most bullish among them. And Remember ranbaxy already
achieves its escape velocity(>20 day EMA).
Slow Gears in Nifty
SBI,ICICI Larsen & Tourbo, DLF : Situation is exactly the same as of Nifty. Candles closed well below
20day EMA. If these counters closed positive on coming monday(25th, Aug,2008) then chance of
formation of bullish morning star – a bullish trend revesal pattern. So a positive close in these
counter can offer further escape velocity to nifty. In case of SBI almost a DOJI symbol is formed
so any positive close will bring a trend reversal – Bullish morning doji pattern in this counter.
Dead and Broken Gears in Nifty
ACC,RCOM,TATA STEEL : Tradning well below 20day EMA for couple of days and considered to be
the weakest stocks among the nifty constituents.
Conclusion
Almost all the stocks in the nifty are well below the oversold in term of stocastic Indicator, showing
a sparking positive momentum. This spark may be enough to keep the nifty rocket to moving into its
orbit once again. Just hope for the spark to give some escape velocity to the nifty rocket.

Nifty turns to sell mode on 90 min charts with trailing resistance coming near to the 5500. Similarly Bank Nifty too in sell mode...