It is advisable to use the Nifty as a benchmark for our Equity Markets. It is widely traded and shows the highest volume along with all it’s derivative products.

I will mainly be using the Elliott Wave Theory for my analysis for the long to medium term aided by other momentum indicators to substantiate for the short term. 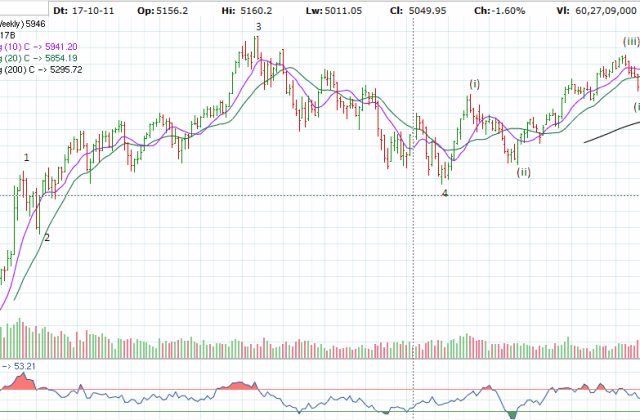 Position of the Nifty : Only The Elliott Wave can precisely pinpoint the exact position of any index with a view of the probable direction. This position holds the key for all future studies. An erroneous study will take us on the wrong path and naturally suffer losses. It is for this reason that the location of an index has been the bone of contention between many Elliotticians. Many differ on the wave count and therefore the position.

Analyzing minor wave 5 further would mean dissecting it as follows : Sub wave or minute  wave  i of minor wave 5 ended at 5630 and minute wave ii declined to 4770 (75% correction of the previous minute wave i. Minute wave 3 extended till 6112 followed by the minute iv correction to 5664  It is here that minute 5 started and we are presently at 5863. ( It is advisable to refer to a Nifty EOD chart simultaneously).

Combining all the data at hand, it is safe to assume that minor wave 5 has a minimum achievable target of 6700 in the coming months, albeit,  for its minute corrective waves along the way, which I will analyze closely and keep my posts updated.