You are here: Home / Economy / India and Key Economic Indicators – 2013

This week we are going to look into the insights about Top 21 Key Economic Indicators in India. Hope this will give us a better clarity,insights and understanding about the state of our country’s economy.

1. GDP fiscal year YoY %
GDP measures summary value of goods and services generated in a relevant country or region. A region’s gross domestic product, or GDP, is one of the ways for measuring the size of its economy.

Recently GDP record 5 per cent, lowest in a decade, on account of poor performance of manufacturing, agriculture and services sector. 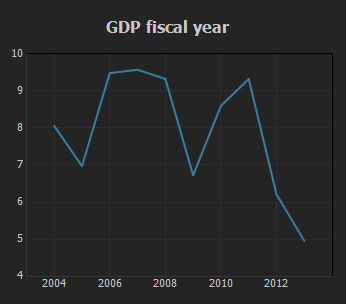 GDP (gross domestic product) growth dipped to 5.3 per cent in the second quarter (July-September) of 2012-13 from 6.7 per cent in the same quarter during the previous fiscal, mainly owing to dismal performances by the farm and manufacturing sectors. 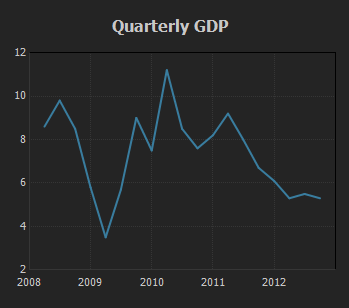 The manufacturing sector has been impacting industrial growth severely for the last few months, the pull-down in agriculture during the quarter has led to a much lower GDP growth at 5.4 per cent during the first half (April-September) of 2012-13 as compared to a comparative robust expansion of 7.3 per cent witnessed in the same period a year ago 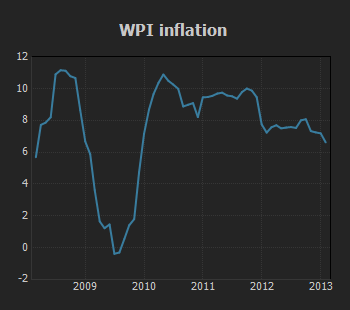 The purpose of the WPI is to monitor price movements that reflect supply and demand in industry, manufacturing and construction. This helps in analyzing both macroeconomic and microeconomic conditions

Wholesale price index (WPI)-based inflation fell to 6.62 per cent in January, the lowest since December 2009 and currently at three year low.

The Federal Fiscal Deficit, released by the Controller General of Accounts, is the difference between the amount the government takes in as revenue against its overall spending. 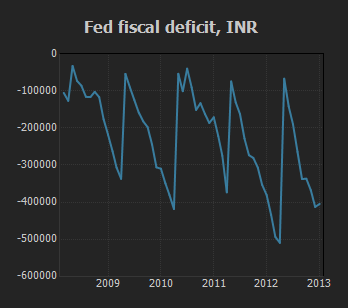 Generally speaking, if the reading is negative, it means the Indian accounts are in a surplus, and that should be positive (or bullish) for the Rupee. On the other hand, a growth in the federal deficit is considered negative (or bearish) for the Rupee.

The rate at which the RBI lends money to commercial banks is called repo rate. It is an instrument of monetary policy. Whenever banks have any shortage of funds they can borrow from the RBI. 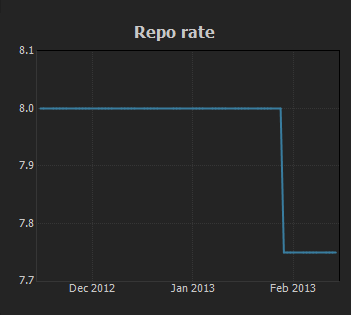 An increase in reverse repo rate can prompt banks to park more funds with the RBI to earn higher returns on idle cash. It is also a tool which can be used by the RBI to drain excess money out of the banking system.

6.Reverse repo rate
Reverse Repo rate is the rate at which the RBI borrows money from commercial banks. Banks are always happy to lend money to the RBI since their money are in safe hands with a good interest. 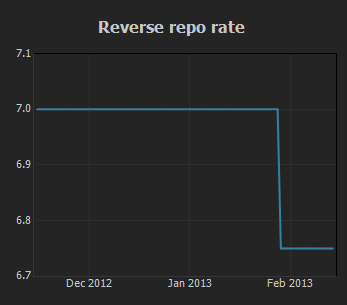 A reduction in the repo rate helps banks get money at a cheaper rate and vice versa.

Cash reserve Ratio (CRR) is the amount of funds that the banks have to keep with the RBI. If the central bank decides to increase the CRR, the available amount with the banks comes down. The RBI uses the CRR to drain out excessive money from the system. 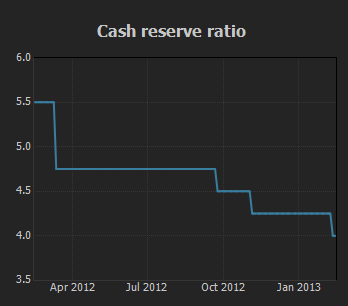 Scheduled banks are required to maintain with the RBI an average cash balance, the amount of which shall not be less than 4% of the total of the Net Demand and Time Liabilities (NDTL), on a fortnightly basis.

8. Cumulative ind. output YoY %
The Cumulative Industrial Output released by Ministry of Statistics and Programme Implementation measures output of Indian factories, calculated as a weighted aggregate of goods. A high reading is seen as positive (or bullish) for the Rupee, wheras a low reading is seen as negative (or bearish). 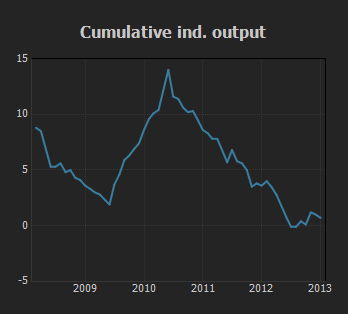 Changes in the volume of the physical output of the nation’s factories, mines and utilities are measured by the index of industrial production. The figure is calculated as a weighted aggregate of goods and reported in headlines as a percent change from previous months. It is often adjusted by season or weather conditions and thus volatile. However, it is used as a leading indicator and helps in forecasting GDP changes.

The Infrastructure Output released by the Ministry of Commerce and Industry is a measure of the production in a range of sector related to infrastructure including coal, electricity generation, crude oil, refinery throughput, finished steel and cement. Generally speaking, a high reading is seen as positive (or bullish) for the Rupee, while a falling trend is seen as negative (or bearish). The Industrial Output released by Ministry of Statistics and Programme Implementation measures outputs of Indian factories. Changes in industrial output are widely followed as a major indicator of strength in the manufacturing sector. A high reading is seen as positive (or bullish) for the Rupee, whereas a low reading is seen as negative (or bearish). 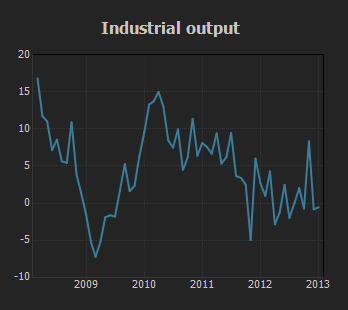 India’s manufacturing output expanded at its slowest pace in three months in January as new orders grew at a weak pace and power outages continued to hurt industrial activity. 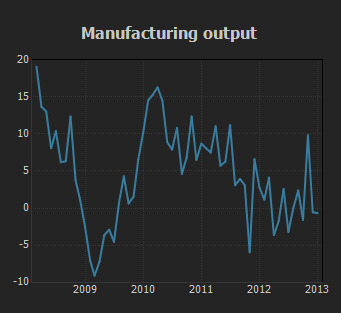 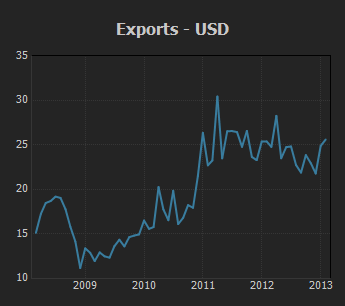 After contracting for eight straight months, India’s exports grew by a meagre 0.82 per cent in January to USD 25.58 billion 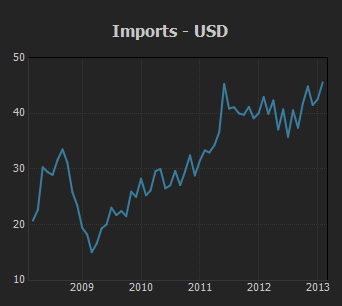 14. Trade deficit govt – USD
India’s exports increased marginally by 0.82% in January to USD 25.58 billion compared to USD 25.37 billion in the same month last year after contracting for eight straight months. At the same time, Imports jumped by 6.12% to USD 45.5 billion in the month. Trade deficit jumped to record high of USD 20 billion which is becoming the biggest concern for the Indian economy 15. Trade deficit-RBI
The Trade Deficit released by the Ministry of Commerce and Industry measures the amount of imports compared to exports of total goods and services. 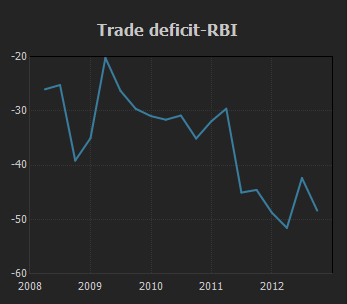 Either a surplus or a deficit can be shown in any of these components. 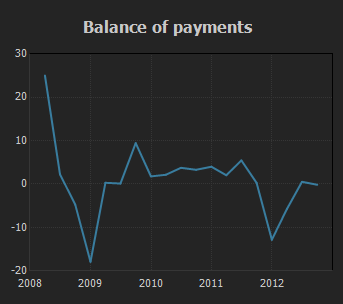 Balance of payments shows strengths and weaknesses in a country’s economy and therefore helps to achieve balanced economic growth. The release of a balance of payments can have a significant effect on the exchange rate of a national currency against other currencies. It is also important to investors of domestic companies that depend on exports. Positive current account balance is when inflows from its components into the country exceed outflows of the capital leaving the country. 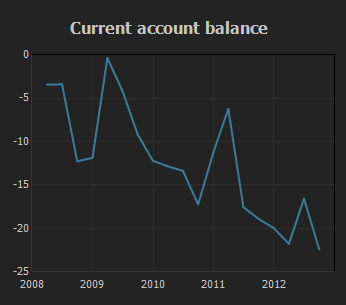 Current account surplus may strengthen the demand for local currency. Persistent deficit may lead to a depreciation of a currency

As per the standard practice, India’s external debt data are disseminated on a quarterly basis with a lag of one quarter. Statistics for the first two quarters of the calendar year (ending March and June) are compiled and released by the Reserve Bank of India, while the data for the last two quarters (ending September and December) are compiled and released by the Ministry of Finance, Government of India. 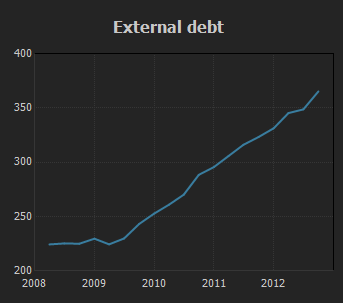 In addition, Government of India brings out an Annual Status Report on External Debt that contains detailed analysis of external debt position of the country. 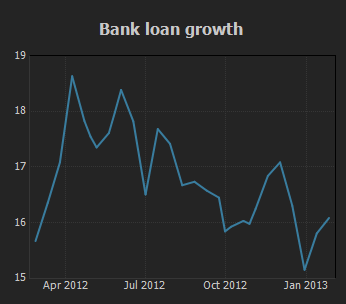 M3 Money supply YoY %
Monetary aggregates, known also as “money supply”, is the quantity of currency available within the economy to purchase goods and services. Depending on the degree of liquidity chosen to define an asset as money, various monetary aggregates are distinguished: M0, M1, M2, M3, M4, etc. Not all of them are used by every country. Note that methodology of calculating money supply varies between countries.

M3 is a broad monetary aggregate that includes all physical currency circulating in the economy (banknotes and coins), operational deposits in central bank, money in current accounts, saving accounts, money market deposits, certificates of deposit, all other deposits and repurchase agreements. Excess money supply growth potentially can cause inflation and generate fears that the government may tighten money growth by allowing the interest rates to rise which in turn, lowers future prices India’s M3 money supply rose an annualised 12.7 percent in the two weeks to Jan. 25, compared with 14.8 percent growth a year earlier, the Reserve Bank of India said on Wednesday. 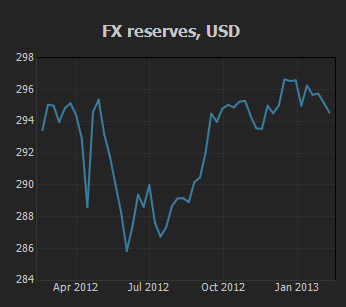 Summary of Latest Updates on Top 20 Economic Indicators of India 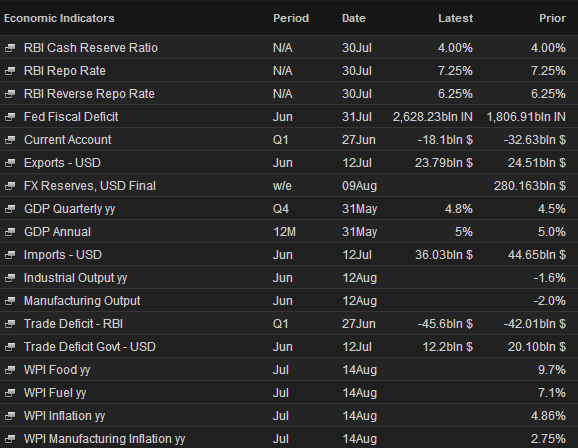